I saw Rembrandt walking down the street.

I was sitting on my porch, watching the wind blow leaves down from the trees across the way. He was heading up to Clark St. He strolled right through the growing pile without slowing his step.

He came back the other way about half an hour later with a bag of groceries.

Let me back up a minute.

I recently finished a four-week class called “Visual Inspiration: Art in Writing.” It was virtual, through the Newberry Library. The Newberry runs a huge slate of adult learning seminars three times a year. Often they're unique opportunities: the first one I took, in 2019, was on the history of the 1919 Black Sox baseball team, which culminated in a class visit to catch a ballgame.

This one was a workshop about how to utilize paintings and other visual art in one’s writing practice. I enjoyed the simplicity of the class structure: we brainstormed a bunch of different possible techniques to use in responding to a piece of art, we looked at some art, and then we spent time writing about it.

At the last session, we each shared a short piece that we’d been working at during the class, and what our inspiration was.

The painting that drew my attention was a very early Rembrandt—his first ever self-portrait. What stands out to me is that, in it, he just portrays himself as a completely normal dude. None of the fancy dress or pose that's typical of the era. It's immediate, like you're standing in the room with him.

We’re used to having difficulty conceiving that contemporary celebrities are people, like you and me, who once were normal, and maybe still are; how much harder it is to internalize the same fact when it comes to one of the giants of art history. If you were to free associate, the word that probably comes to mind first when you hear “Rembrandt” is “master,” as in, the Old Masters, or the Dutch Masters.

This painting upends all that. It’s just a doughy guy with a pale complexion and disheveled hair. It could be any random guy walking around Leiden in the early 17th century, nearly every single one of whom is utterly forgotten.

He’s so common-looking that, as I was hanging out on the porch before class, reading that day’s assignment—an incredible essay by Jeanette Winterson called “Art Objects”—I saw someone who, from across the street at least, looked exactly like him. Just your average doughy and pale Andersonville resident, who could secretly be well on his way to becoming one of his generation’s greatest artists.

So little do we know.

Checking Up on Rembrandt

I opened the door to Rembrandt’s tiny studio a little before mid-day.

It wouldn’t open all the way at first; I shoved aside a pile of blank canvases and entered the poorly-lit room. Poorly-lit because its occupant was still fast asleep in bed with the curtains drawn. Nothing changes, I thought.

My eye gravitated toward the easel in the opposite corner, positioned at the ideal angle for the setting sun to blaze it alight through the window. Surrounding it were small tables of various lengths and heights, and these were covered with burnt-down candles, rough-looking brushes, jars of paint, and moldy cheese rinds. I moved closer to inspect the painting propped on the easel, nudging aside scrolls of draft sheets as I went.

When I reached the work corner, and stared into the canvas for the first time, I was shocked to discover the face of Rembrandt staring back at me.

I looked from the painting to the crumpled, snoring mass on the bed, and back, and then back again. Remarkable. How had he done it? The painting was so true to life. It was all there: the nest of reddish-brown hair, the unruly curls encroaching on the cheeks from behind the ears; the doughiness of face and body; the earnest determination in the eyes. It could only be that he’d found a way somehow to detach his eyes from his skull, and circle them round to take in every detail at length.

Only then, after my surprise had subsided a bit, did certain other details of the painting present themselves to me. The lighting—it was all from the back! The eyes, and most of the face, too, were enveloped in dark shadow. It wasn’t merely a picture of Rembrandt, but a picture of Rembrandt standing in front of this very window, with a brilliant sun behind him and nothing but a shoddy candle to illuminate his visage.

The curls, in great contrast, were so sharp and bold. I’d never seen anything like it. Craning my neck to scrutinize the brush strokes as intimately as I could, I saw that there were small, wide gashes throughout that area of the painting. It was almost as if he’d turned his brushes around and gouged through the coiffure with the butt end. I glanced at the tables. Sure enough, there were several brushes with wooden tips caked in oils.

For a long moment, I felt struck down with awe. And then I thought: what is he going to do with this thing?

Shifting my weight, I suddenly stumbled over the broken leg of a chair and clattered to the floor with a loud crash. On the way down, I managed to grab onto the bed sheets to try to arrest my fall. It wasn’t much help, since they were already mostly on the ground anyway. All I accomplished was to yank the sleeping artist from his slumber and topple him over the edge of the bed.

Rembrandt rolled over top of me and came to rest at the base of the easel, the thin legs of which were constructed of young birch and began to wobble. I was paralyzed as I watched the top of the portrait keel over into a barrel roll. But Rembrandt, snapping to attention, leapt from the ground with a grace I’d never seen him, or anyone, display before. He snatched the canvas by its sides in mid-plummet, gathered his balance and, steadying the rocking easel, placed the painting back on its throne. Then he turned slowly to look at me.

“You’d be paying me far more than that if you’d damaged this,” said Rembrandt.

“It’s spectacular. Audacious in every way. But surely you don’t mean that you’re going to sell this?”

“Perhaps not. Its value to me, however, is incalculable. It represents everything I believe a painting ought to be, and it shall be the model for all my future work.”

“Just a minute now. I grant that I’ve been away for some time, and I might need to catch up on a few things. I don’t understand how you can say that. This is a lark. A breathtaking lark, no doubt, but all the same. If you go on painting these shrouded figures you’ll never sell another painting in your life!”

“Who says I aim to sell another painting in my life?”

“Why, of course, you—I mean, how could you not—explain to me then, do you intend to paint only yourself from here on?”

“Why shouldn’t I paint myself? Because that’s not what the masters have taught?”

“But you’re the best of us! You’re meant to paint kings, and grand landscapes, and all the great battles of our lives. You’re the pride of all Leiden!”

“Your pride, not mine. Have you looked at this painting?”

“Yes, isn’t that what we’ve been discussing? Haven’t I already told you it’s a splendor?”

“Have you really looked at it?”

I looked at the painting again.

“Can’t you see that I’m ashamed?” said Rembrandt, his voice barely above a whisper.

“I’ve hidden myself in the shadows, you see. Which is probably where I’ll remain. The Masters say I should paint rich people, yes, and scenes from the Bible, and I should aspire to paint famous kings and dukes and lords from the righteous past, and all these other dead things, and all in a way that is palatable to people, in a way that never challenges them and never calls anyone to account. And here you are saying the same. You say that’s the only way to become well-known, and wealthy, and that’s how my name will live on across history.

“I’ve forsaken all that now, William. Who cares about history if being bound to it will rob me of what I can touch today? Yes, you’re right, I’ve been given an incredible gift. I can’t ignore how my soul is calling me to use it.

“So nobody will care. Let them not care. I’m not suicidal; I’ll do what’s necessary to put food on the table. And otherwise, I’ll paint what I want to paint. I don’t want the future to know me. I’ll merely be history to them. Let them concentrate on their own futures; let them break this chain of servitude to how things have always been.

“For me, no more looking back. Next time you’re at some fashionable exhibit of some Master’s pointless battle paintings from some pointless war, you won’t find me there. You want to find me, then turn over your shoulder. I’ll be walking in the opposite direction.” 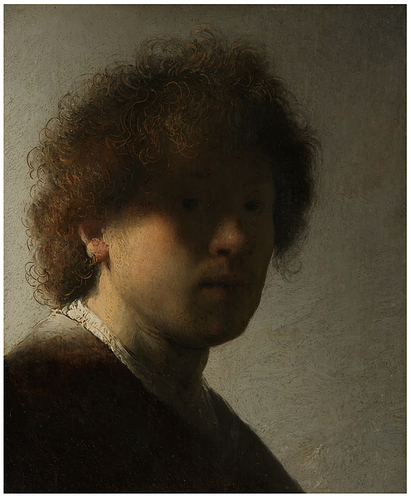