I was listening to the Minutemen’s Double Nickels on the Dime this week when I realized I had never seen a picture of Mike Watt before.

Watt—certainly the most famous Watt in America prior to J.J.—was the bassist in the Minutemen, and D. Boon was the guitarist. Both wrote songs and “sang” lead—mostly spoke or shouted it, really—but D. Boon was the main frontman and the wilder personality. They quickly developed a reputation for short, punchy songs with countercultural themes, and for a D.I.Y. aesthetic to making and distributing their music. They wanted to put their work in front of people in as efficient a manner as possible while remaining true to themselves, an attitude they summed up by coining a phrase: “We Jam Econo.”

When D. Boon died in a car accident at the age of 27, the band dissolved immediately, and it cemented the Minutemen’s status as underground music legends. It also furthered D. Boon as an object of fascination, while Mike Watt carried on with a career that suddenly seemed a little more subdued and unexciting. It’s something that happens to every rock star who doesn’t die young, especially when they are so closely associated with someone who did.

I’ve always thought dying young is overrated. I like learning from people who’ve been around the block a few times. So I am thankful Mike Watt is still around—a “scene elder,” he is dubbed—and I was pleased to discover, while looking up his photos, that he’s out there dispensing his wisdom regularly. What caught my eye was an interview in Psychology Today called, “Mike Watt’s Whole Enchilada: Musician Shares ‘We Jam Econo’ Philosophy.”

It starts off talking about Watt’s advice for young musicians, but it also makes clear that his philosophy applies to art and creativity in any genre. After the article finished reciting Watt’s bona fides, this bit immediately seized my attention:

But in talking with Watt, we realize that his career is about something more than music or awards. Watt’s longevity in the field is not just about his ability to play; it’s about a no-nonsense, do-it-yourself “We Jam Econo” approach, which dictates that you keep making music with whatever resources or budget you have. And you make it happen, no matter what.

And while many people feel they have to choose between “real life” and their music, and can only achieve life balance if they stop playing or minimize the importance of music in their life, Watt has charted another path. His focus and hard-core determination to play music can paradoxically be another way to achieve a balanced life.

I wonder if “balance” is even the right word. David Whyte, in his awesome book The Three Marriages, makes the case that “work/life balance” is not only an elusive goal, but a misguided one. In Whyte’s view, the different areas of our lives—our work, our play, our relationships with others and with ourselves—are all best served when we put them in conversation with each other and find ways to integrate and combine them. In eschewing “balance,” he’s not saying that we should work all the time—just that we don’t need to wall off one part of our life from another. I’ve seen this idea in a lot of places now, including in Jungian psychology with its focus on concepts like “integration” and “wholeness” and “individuation,” and I really like it.

Toward the other end of the spectrum is the all-or-nothing culture you see a lot in entrepreneurship, competitive sports, gifted student programs, and so on. If you love something, or if you’re talented at it, you must be meant to dedicate your entire life to it. Got a promising idea for a start-up? Great, quit your job and dedicate 80 or 100 hours a week to it, until you achieve a lucrative “exit” or burn yourself (and your money) out. Not everyone practices entrepreneurship this way, and it can be a highly fulfilling pursuit, but the culture encourages people to go as hard as they can on their business, at the expense of everything else.

I won’t dive into where this mindset comes from, because I will write way too many words here, but it’s all about meaning and intentionality. For a person who wants to get rich or famous as a start-up founder, single-mindedness might be warranted. However, if their goal is to create something beautiful, provide better service to a neglected group of people, or make enough money to be their own boss, maybe that’s not necessary. Maybe their work is better served when their lives have many facets; when different materials rub against each other, sparks often fly.

That’s what Mike Watt wanted. It was still hard work and dedication for him, but with an eye toward sustainability. And this is the part that blew my mind a little: he even felt like having a day job was the superior situation for pursuing purer creative expression.

His influences were often artists who took a DIY approach; that is, they made art for its own sake, rather than as a career and paid for it themselves. And Watt felt that by these artists having a “day job” to support themselves financially, they were freed up to focus on making the best art possible.

“I can tell you the DIY movement goes way back before ours. It’s part of a tradition – Woody Guthrie, Walt Whitman – stuff that goes back 100 years. Walt Whitman put out his “Leaves of Grass” himself. Franz Kafka worked at the insurance company – he called it the two desks. … Charles Ives, I think, did insurance work too,” Watt explained. “By having that job doing other work besides music, you can secure the autonomy of not having to make compromises with your artistic expression.

“You can keep your music beyond compromise.”

The writer Elizabeth Gilbert puts it this way: “I promised my writing that I would always support it; I never wanted to force it to support me.” Like Mike Watt, she wanted to do this for life, whether or not it paid the bills.

One of the things that did not connect for Watt was the idea of being a “rock star,” whereby his music would take him away from his life. “Now, of course, we were from working families, so we were doing jobs other than music. It’s all jobs. It’s all work,” Watt said. “I hear people talk like this, ‘I want the band to be successful so I won’t have to work.’ I mean, what’s that about?”

Watt rejected the sense of the duality between “real life” and being a musician. He described the influence of spiritual guru and writer Rupert Spira. And in rejecting that duality, Watt embraced a view that he does not have to give up or compromise his life or music.

“Mr. Spira talked about duality, as opposed to this new thinking — which is kind of old — non-duality. See all these kind of binary systems we put ourselves in — either/or,” Watt said. “That’s the trippy dance of life. How do you integrate things? Not how do you pick one over the other. That’s just another form of hierarchy. Things that seem to keep us so down – binary.

“Why can’t it be part of the whole enchilada?”

This is basically what Jung said, too. (He never phrased it quite that way, but it’s fun to imagine that he did.)

The rest of the article goes into more detail about how Mike Watt and D. Boon actually achieved this kind of integration with the Minutemen, and how it allowed them to create some truly profound and delightful music that has stood the test of time.

At the end, Watt is talking about the importance of resourcefulness and having an open mind when it comes to pursuing your goals in life, and I can’t get over the way he describes it:

Nothing’s the way it is! Ain’t that the truth.

I highly recommend checking out Double Nickels on the Dime, if you haven’t, and I could pick any of a dozen songs from it as my favorite. This one in particular resonated with me this week, living as we are through another time in which the chasm between working people and those in power is particularly wide.

All these men who work the land
Should evaluate themselves and make a stand
Can’t they see beyond the rhetoric?
The lies and promises that don’t mean shit 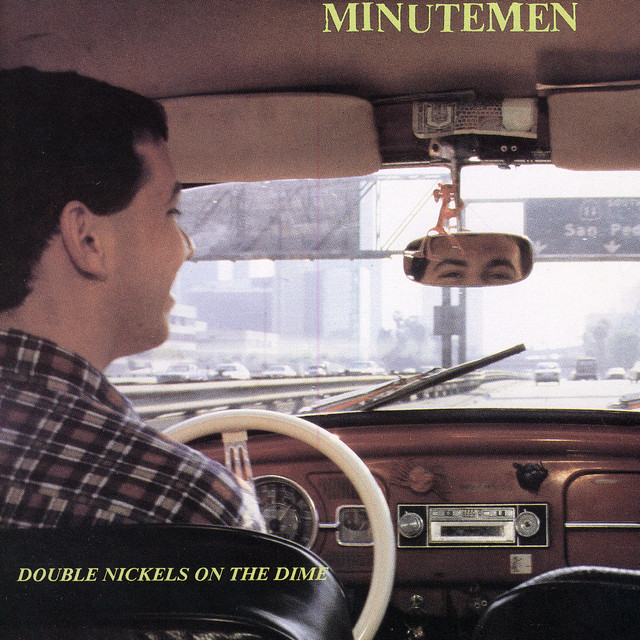 Themselves - song by Minutemen | Spotify

That’s all I’ve got. Please take care, write back if you can—what are you most excited for this summer?—and I’ll see you next week.