Did this feel like a very long week to anyone else? I was even lucky enough to have the day off work on Monday for Martin Luther King Day, and it still felt like I had worked a full week by the end.

Obviously there was a notable political transition ceremony, which I decided not to watch live, although I made sure to check out the videos of Lady Gaga singing the national anthem, and Amanda Gorman reading her poem, both of which I highly recommend if you haven’t seen them. (By the way, if you are a poet looking for a mainstream opportunity to read your work, it’s pretty much the inauguration or nothing.)

I’m just a little tired of high-flown rhetoric at this point. I’m more interested in what the new administration is going to actually do.

The actual term self-help is kind of an oxymoron in the way that it’s commonly used to refer to books, courses, seminars, exercise programs and the like. Why do we look to others for “self” help? If we were to truly help ourselves, what would that look like?

If there are two ways to approach the idea of self-help—bad-to-OK and OK-to-great—then the implication is that people with these differing mindsets or who are at different points in their psyche’s developmental progression ought not to utilize the same material. (It also stands to reason that if there existed material that could help a person who doesn’t know they have a bad-to-OK mindset to realize that they do, it would be extremely valuable.)

People who are functioning as OK-to-great already know how to help themselves. Ironically then, they are the ones who do not actually need it. They are “OK” either way.

People who are functioning as bad-to-OK do not see themselves as fundamentally “OK;” they are in search of a self-acceptance that can only come from within. They need to help themselves, but the self-help industry as currently constituted does not have much for them; at best, it’s confusing to sort out which material is meant for people in need of transformative change and which material is meant for people who just want to optimize what’s already working. And worse than that, it often tries to sucker them in with the promise of making them OK, which diverts them away from the real inner work that they need to do.

What is real self-help, then? What does it mean to accept oneself, and how does one achieve that? Thus far, it has been much easier for me to describe what it is not, what it does not look like.

A lot of times, for me, an introvert who has struggled with confidence, it seems like many people who have self-acceptance don’t actually know how they got it. It seemed “natural,” and from this, I tended to assume they’ve have always had it, and that feels demoralizing. I still don’t know the answer, except to say that different people arrive at self-acceptance in many different ways, and thus it’s not very important or useful for people engaged in this struggle to look to others.

It feels like it should work, though. It makes logical sense. I am operating with a bad-to-OK mindset. I want to be OK. You are an OK-to-great person. You already are OK. If I can just figure out whatever it is that you’ve figured out about being OK, shouldn’t that make me OK?

Have you heard the term “energy vampire?” That’s what happens when I’ve tried to follow this process. Because I’m under the illusion that self-acceptance is a tangible fluid, like blood, and that I can somehow suck it out of someone else and inject their self-acceptance into my own veins. Blood can be extracted from one human and used by another. Insulin can be taken from a person whose body knows how to make it and given to another person whose body does not.

It’s not painless, however. This process requires puncturing someone, harming them. Imagine doing this without their consent—that increases the harm manyfold.

Yet I’ve thought that I could perform basically this same process on an intangible personal quality. And it does in fact take something out of the other person. Maybe not as much if the person is a public figure, but if it’s a friend, family member, or even an acquaintance, the effect can be very real.

In practical terms, for me, this has sometimes meant trying to do whatever they do, copying their behaviors down to mannerisms even, and attempting to divine their thoughts and emotions, as if trying to literally become them. It looks like I’m running away from myself, which is precisely the opposite direction I need to head in if I want to accept myself.

Of course it doesn’t work. It’s like trying to get a blood transfusion from someone whose blood type is different from mine, except that when it comes to self-acceptance, if this were a physical quantity it would exist as a unique type for every single person. Your blood may be able to keep me alive, but your self-acceptance can never be the basis of mine.

The way to become OK has absolutely nothing to do with other people who are already OK. They can help, but only in very specific ways, only in ways in which the person who is seeking to be OK has the agency. Booking a therapy session, for example.

Paradoxically, in fact, the first step in becoming OK is admitting that you are not OK. It’s a trick of the mind. The secret is that you have been OK the whole time, and you’re lying to yourself that you’re not. The only way to get past the lie is to admit its existence. Admit that you believe it. Only then can you see the truth being hidden behind it.

Bradford William Davis - “Hank Aaron is dead, but his life’s story is already at risk”

Baseball Hall of Famer Aaron died this week, and, like Jackie Robinson before him, his legacy is under threat from (mostly white) journalists and public figures who wish to “flatten” Aaron by pretending that he never got angry about the racist treatment he received in the game and in society at large. They’re using words like “stoic” and “grace” and “dignity,” which are attributes Aaron certainly possessed, but they get the story backwards: he wasn’t stoic (only) because it was his nature, he was stoic because he had no choice as a prominent Black man in a white-run sport, in a white-run country.

Aaron dethroning Ruth dismantled arguments of Black inferiority. But in the next breath, he was conscripted into another of America’s insidious racial myths: the genteel Black martyr. White America is only comfortable reckoning with the victims of its racism when they politely turn the other cheek. When they are stoic.

This is actually a hybrid of a music video and a documentary, interweaving lessons on the nature of whiteness with one of Rage’s best-known songs in a powerful and innovative way.

Ashley and I heard this song again on college radio last night—we’re already huge Courtney Barnett fans, yet hadn’t dug into this one—and debated its meaning. I’ve been thinking about this self-help stuff a lot, obviously, and the lyrics in the chorus sounded to me like something a self-help author might say who didn’t want their readers to take them quite so deadly serious. For Ashley, these lyrics reminded her of what it feels like to be a woman who is the object of men’s juvenile infatuations. You be the judge! The link above explains it, if you want to cut to the chase; I like both interpretations, and I really like a song that can be experienced in multiple ways.

Put me on a pedestal and I’ll only disappoint you
Tell me I’m exceptional, I promise to exploit you
Give me all your money, and I’ll make some origami, honey
I think you’re a joke, but I don’t find you very funny

Despite what Barnett says in this song, she is a fantastic rock star and you should adore her. 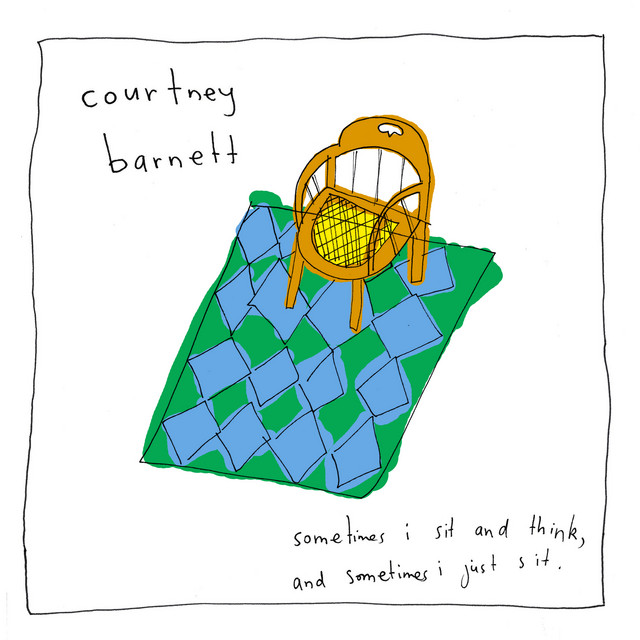