I cleaned out my coworking space today. We cancelled the lease on my desk earlier this month, which put me on the clock to move my stuff, but I’ve been putting it off a bit. As I drove up to the building, a sad feeling came over me and I realized why I didn’t want to do it: this was closing a couple different chapters in my life.

Obviously my pre-pandemic life was bravely living on through that desk. When I keyed in my code and went inside, it was a real ghost town in there. It’d be empty on a Sunday anyway, but most of the other desks were already vacant. But I found my jacket draped over the back of my chair right where I’d left it nine months ago, as if it had been waiting for me this whole time.

It makes me glad I never had a chance to fully personalize my space, because it would have been so much sadder to walk in and see a bunch of photos and stuffed animals and notes, knowing I’d have to dump them all into a bag. As it is, I still had to remove my monitor and keyboard and the few small mementos I did bring to the space, leaving yet another barren surface.

The other chapter I closed was my Ravenswood chapter. The coworking space is in the neighborhood that Ashley and I first moved to when we came to Chicago in 2018. I chose it not long before we moved out of our one-bedroom apartment and into our new condo in Andersonville, and I continued commuting to it even after we left the neighborhood, because it’s really not that far away, and also because I liked the idea of keeping a tie to Ravenswood and having opportunities to still spend time there.

The coworking space is also right next to the Montrose “L” stop, on the Brown line, which reminded me how much I miss riding the train. Right after we moved, when people would ask me what I loved most about Chicago, that’s what I would say. It might still be true, but I haven’t been on the “L” since March 12 (yes, I remember a lot of things about that day).

At this point I know I could safely ride it if I wear a mask and keep distance from others—already a time-honored “L”-train tradition. It still seems better to play it safe. But also, with the vaccine rollout taking shape, we’re finally seeing the light at the end of this long, dark tunnel. Hopefully a return to safe public transit is around the corner.

Until then, remain vigilant! Shop local. And I hope you had a happy Hanukkah, will have a merry Christmas, and why not enjoy all the other days as much as you can? I know some are fortunate to have more joy in their lives than others right now, but it’s my greatest wish that every person can find it somewhere.

I know that last week I said, “next week we’ll be talking about…” I’m going to have to make that “next next week,” because I need some more time to make the next section pop. Thanks for bearing with me. I’m excited about it! In the meantime, I’ve put parts 1-3 up on my website, so that you can see them all in one piece or share them around:

What Is Death? by BJ Miller

This may be a little heavy, but it impacted me more than anything else this week, and I’ve been sharing it as much as I can. The introduction and the blurb that I saw in the NYT opinion section make it seem like this is about the coronavirus or the pandemic, but it’s really not. While these might provide context and an impetus to think about death, the piece itself is much deeper.

“What is death?” is an important question. Maybe the question. This article does not pretend to have the answers, and it understands that not having answers is the whole point. A couple weeks ago, in Part 2 of “Self-Help,” I led off with this quote, which is great enough to share again:

Be patient toward all that is unsolved in your heart and to try to love the questions themselves, like locked rooms and like books that are written in a very foreign tongue. Do not now seek the answers, which cannot be given you because you would not be able to live them. And the point is, to live everything. Live the questions now. Perhaps you will then gradually, without noticing it, live along some distant day into the answer. — Rainer Maria Rilke

If, as Miller says, there is no known answer to the question of death, then literally all we can do is live the question. And since we probably won’t get an answer until we are done with living, then “living” and “living the question” are in this case one and the same.

I just discovered this band today! We have been listening to a lot of WLUW 88.7 in the car, which is the Loyola University student radio station. It’s so good. I actually forgot what station it was after a while, because they never say anything or run any commercials (this would have been annoying, though, before the advent of algorithmic song recognition). I miss college radio; this reminds me so much of KWUR, the Washington University station at which I spent a lot of my time during my student days. I wish I’d had a show! A couple friends did, though, and I hung out with them sometimes while they were spinning.

This is a mellow, mostly instrumental band with serious funk influences, but they also incorporate music from basically all over the world. It’s such good chill-out, focusing music; I’m writing to it right now. “Lady and Man” is the song I heard on the radio, and it is influenced by the movie Clueless, which the band had playing on mute during their recording sessions, in both the call-and-response of the instrumental lines and the weird background lyrics that evoke a bickering couple. 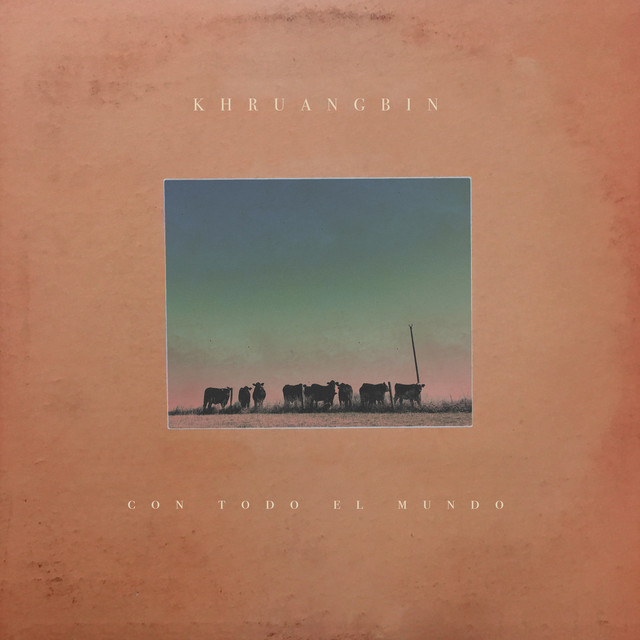